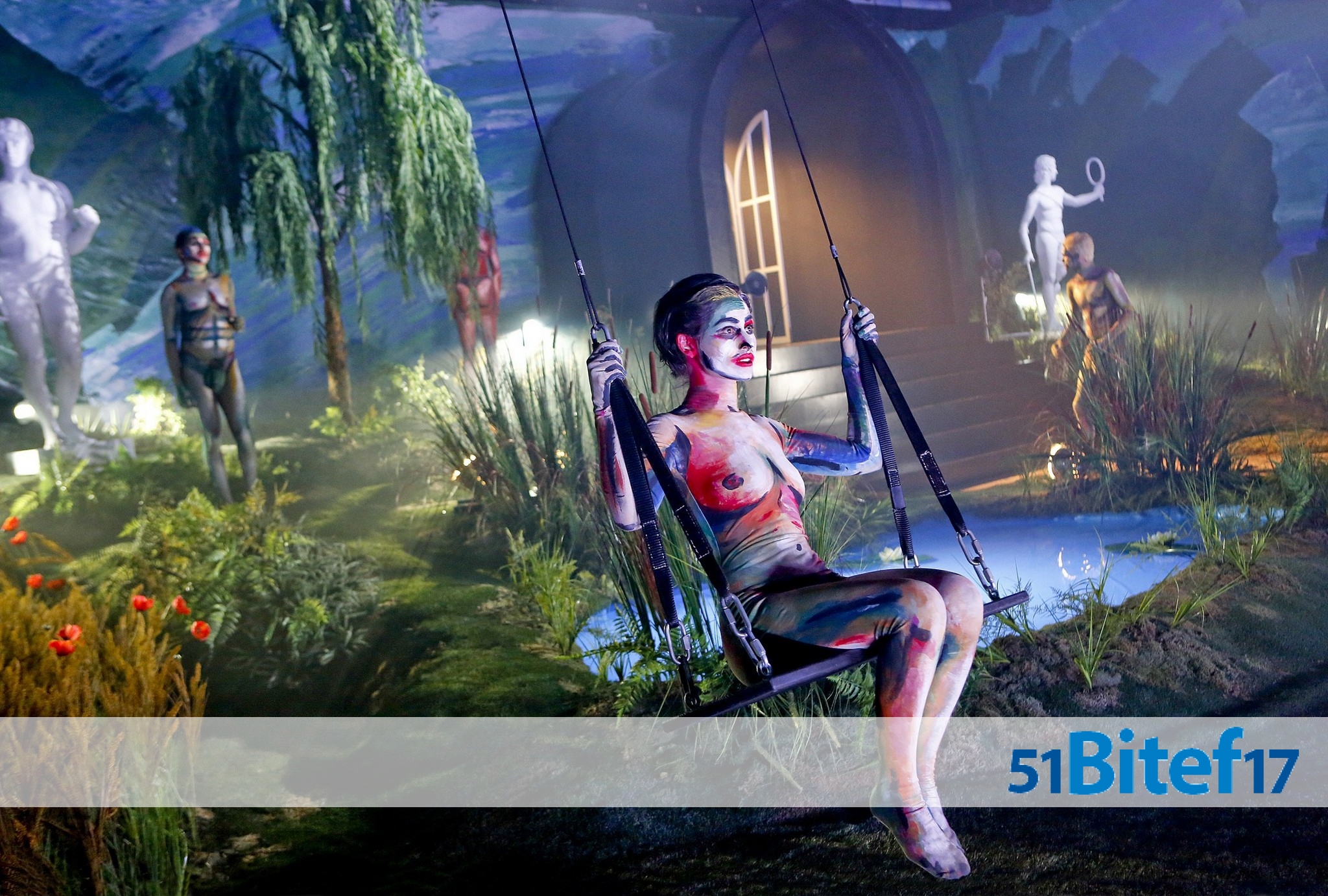 The principal characters in this play by a very young German author, Olga Bach, are three modern young people who put to test and abuse all freedoms of the present-day Western society, through attaining ecstasy which, however, fails to give them what they want and instead induces fear, insecurity and helpless longing to experience the reality. Ersan Mondtag, its director, changes the context very radically, transferring the action from the modern urban environment to the hallucinating pastoral world: artificial vegetation and ponds, plastic forest animals, actors clad in costumes representing naked humans – like a cartoon version of Adam and Eve. With this trash poetics, the director offers us an interpretation which can be read as a political comment: the Western society is associative of an idyllic pastoral which, as such, needs no change, in which the security is ensured whilst, in fact, everything there is false, hypocritical, rotten through and through, on the brink of an abyss... Ranging from ancient cosmogony with its inebriating Dionysian force and joy of living (Mount Olympus) to the disintegrated modern pastoral and its impotent characters (The Extermination), the 51st Bitef closes the circle of an "epic trip" exploring how and why our time is out of joint.

Three characters grow up in a big European city: they are privileged, well-educated, bored. Whiling away their time with children’s games, they discover the pleasure of the forbidden. They lose themselves in ecstatic states which, however, soon begin to wear thin. The wish for something “real” to happen grows stronger every day. They seek refuge in the intimacy of their close community, which becomes a cage with no way out. The Western project of self-determination has become insecure, even paranoid. What may initially appear paradoxical is remarkable nevertheless: the difference between active self-destroyers and their explosive vests and these passive self-destroyers with their professed hedonism is not as great as they might like. In their latest devised play, Ersan Mondtag and the young Berlin-based author Olga Bach outline the topography of an end time and the fears that go along with it, currently taking hold of the Western world like an epidemic.

ERSAN MONDTAG was born in Berlin in 1987 and works in the fields of theatre and music, performance and installation. In 2011, he enrolled at the Otto-Falckenberg-Schule in Munich. Two years later, he discontinued his studies there and in 2012, he founded KAPITÆL ZWEI KOLEKTIF. With this collective, he developed durational performances, experimental party formats and interdisciplinary theatre works. During the 2013/14 season, he was a member of the REGIEstudio at Schauspiel Frankfurt and directed 2. Sinfonie (invited to the 2014 “radikaljung”-festivalin Munich), Das Schloss and Orpheus# (invited to the 2015 “radikaljung”-festival). In 2015, Ersan Mondtag created his play TYRANNIS, which earned him an invitation to the 2016 Berlin Theatertreffen. The magazine Theaterheute chose Ersan Mondtag as “Emerging Director of the Year 2016”. He was similarly distinguished as “Set and Costume Designer of the Year”. Ersan Mondtag lives in Berlin. He works at Hamburg’s Thalia Theater, Schauspiel Frankfurt, Maxim Gorki Theater in Berlin and Münchner Kammerspiele, among others. His production of Die Vernichtung, devised together with Olga Bach, is Mondtag’s first work as a director in Switzerland.

OGLA BACH, born in Berlin in 1990, became involved, together with Ersan Mondtag, in the Grips Theater Berlin’s youth theatre group while she was still at school (2004-2007). Together, they founded the independent theatre group “PE-Ensemble”. In 2007, her first devised play, Vincent, was premiered at the German-Turkish theatre Tiyatrom in Berlin-Kreuzberg and at Ballhaus Naunynstrasse. After several internships (at Schaubühne am Lehniner Platz and Deutsches Theater Berlin, among others), she interned at the Max-Planck-Institute in Jinka, Southern Ethiopia, where she created the short documentary film Hamar. From 2010 to 2014, she studied Philosophy and German philology at Freie Universität Berlin and Istanbul Üniversitesi in Turkey. In 2014, she obtained the degree of “Bachelor of Arts”. In 2013, she was the lead dramaturge for the durational performance #1/KONKORDIA at the “Schaustelle (Show Site)” of Pinakothek der Moderne in Munich, directed by Ersan Mondtag. She has been studying law at Berlin’s Humboldt-Universität since 2014. Since 2016, she has been a legal advisor at the HU Berlin’s Refugee Law Clinic.

Olga Bach has no illusions, because, as she stated, the figures were ‘the expression of a time in which the prevailing ambiguities and disordered over-information lead people to extreme positions, in order to at least once stand a clear position. They become receptive to conspiracy theories, or cynical or open-racist arguments, while they are convinced to represent a democratic standpoint.’

Mondtag‘s productions are works of art. And as such, The Extermination is an excessive spectacle.

End of the world phantasy The Extermination is a visually convincing, imaginatively opulent picture of the world full of spectacular effects.

While Mondtag, in many of his works so far had abandoned almost completely or completely the text, and thus showed himself to be a master of the ambiguous, he has now developed a quite clear text with his actors and the Berlin author Olga Bach, a text which states the boredom of the young generations, the surrogate for fantasies and desires, which demonstrates the longing for clarity, and maybe even for violence in their expression of thoughts and attitudes. 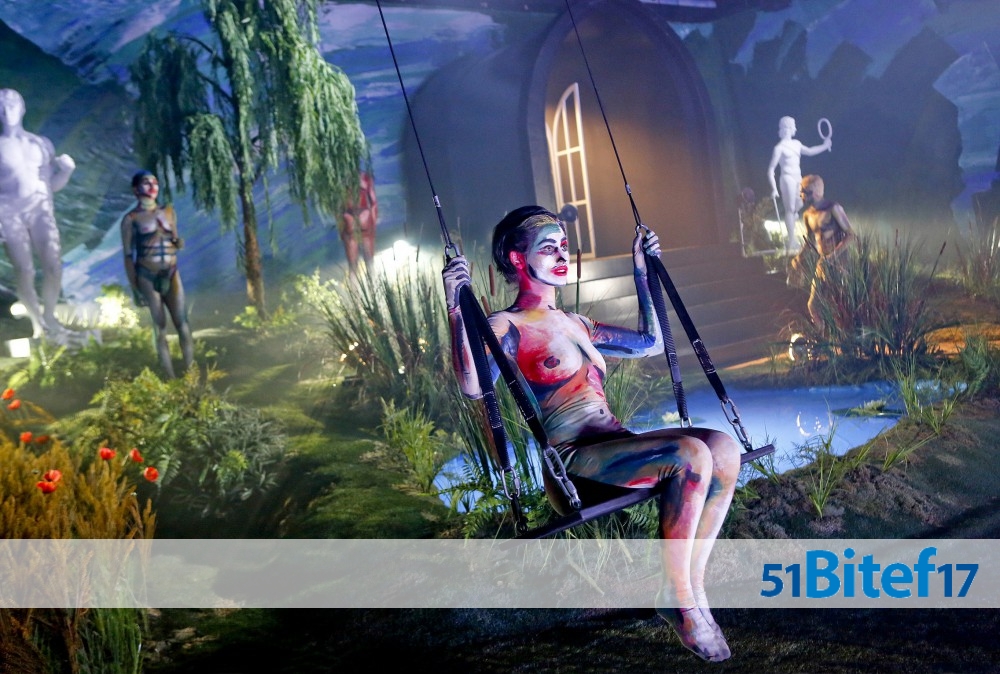 Assistant to the Director:
Jonas Junker