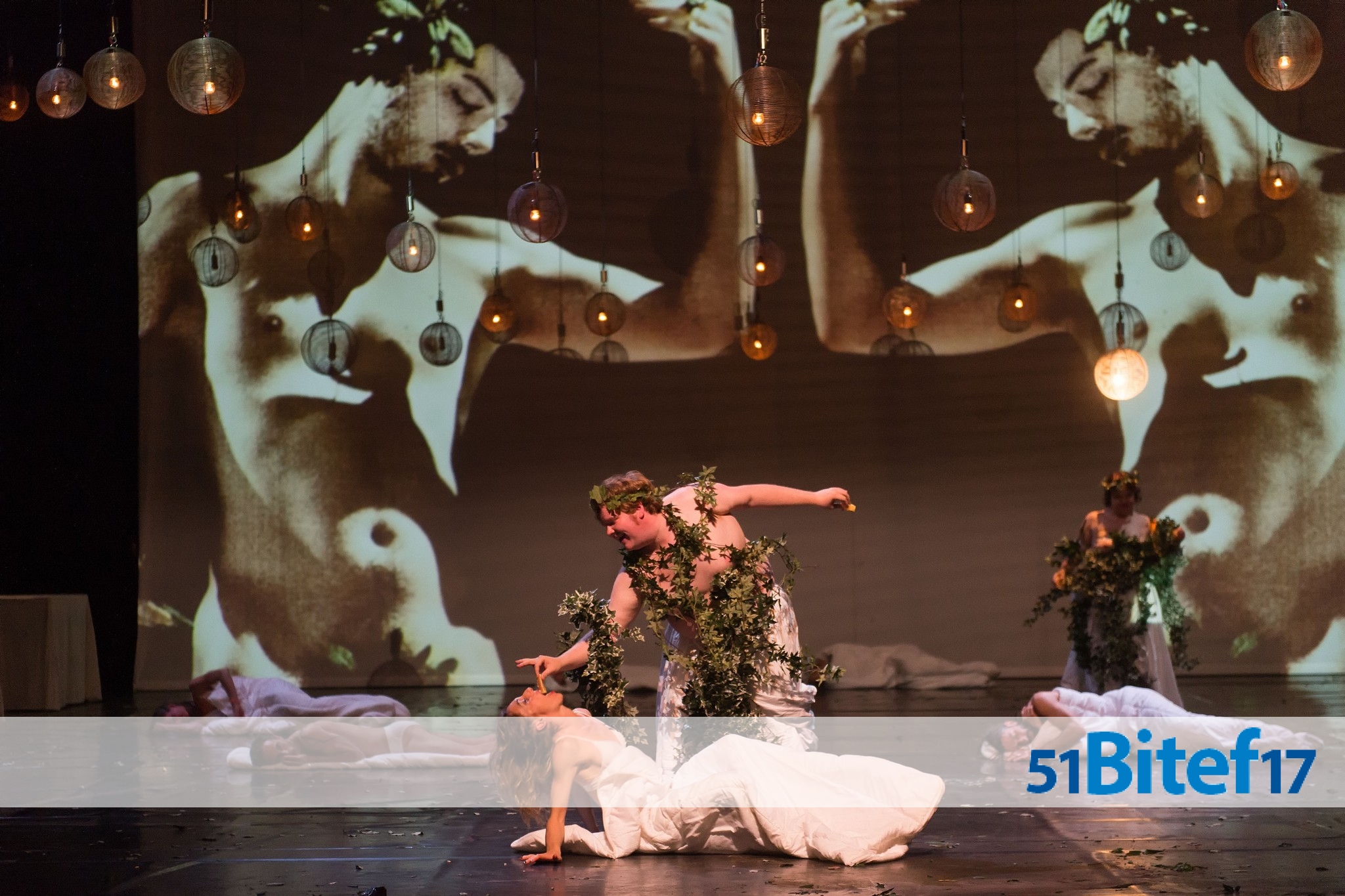 TO GLORIFY THE CULT OF TRAGEDY – A 24H PERFORMANCE

Prominent critics but primarily the reactions of spectators in the cities where this theatre spectacle was performed amply demonstrate that Mount Olympus: To Glorify the Cult of Tragedy – a 24-hour performance by the celebrated Belgian director Jan Fabre is one of the most significant events in the modern theatre. Within the context of the 51st Bitef, this production decodes all meanings of its concept (and slogan): "epic" meaning material derived from epics (and, more broadly, myths), narrative rather than dramatic mode, and long duration (it truly lasts 24 hours), while the word "trip" refers to a passage to, on this occasion, the ancient mythical past, while also representing a colloquialism for a stupefying, hypnotic state induced by productions of such length and theatrical expression. The production is structured as a concert which, without any particular dramaturgical logic and development, lines up the scenes based on complete ancient mythological material – the one found in Homeric epics, and the one articulated by the trio of great tragedians. The host of the program is a provocative, infinitely charming and seductive embodiment of god Dionysus in person, the patron of tragedy and theater. The production is indeed truly Dionysian: hallucinating scenes of ecstasy, bodily exhaustion, orgies, the most sublime poetry as well as primarily visual and spiritual beauty and freedom beyond comprehension, the force and joy of living follow one after the other in separate scenes.

It is the age of humanity and of the birth of tragedy in its most fundamental form: mutilation, obscenity, purification. We recognize the outlines of stories and characters from Greek tragedy, close by yet far away. Fabre wrenches open the flaws in these characters until they are left in tatters, smashed by violence, Homeric laughter and ecstasy. Mount Olympus is not a modernization of Greek tragedy. It is an investigation of the impossibility of representing that which mutilates us and makes us pure again. Alongside tragedy, time also plays a leading role. What is time in the theatre? What happens when time is stretched? Fabre intensifies the present moment, the eternal here and now of theatre, in a maelstrom of images that pull the audience into a different mode of temporal experience, a labyrinth of time. Fabre uses the four generations and 27 performers on stage to exhibit every dimension of his theatre work. The performers speak a language punctuated by hesitations, silences and death rattles, a language that is sometimes just a scream. They dance and move at the urging of a wordless inner force. They wake and sleep on stage. Fabre constructs his images out of their stolen dreams, 24 hours long, and the result is a tribute to the profound beauty of his performers.

JAN FABRE (b. 1958) is considered one of today’s most innovative and versatileartists. Over the past thirty years, he has worked as a visual artist, theatremaker and author. In the late 1970s, the young Jan Fabre caused a sensation as a performance artist. Chaos and discipline, repetition and madness, metamorphosis and the anonymous are the main ingredients of Fabre’s theatre. In 2005, Jan Fabre was the curator of the Festival d’Avignon. Jan Fabre is also a prolific author on the subject of the theatre, whose writings have been published in translation worldwide. Over the years, Jan Fabre has built up an exceptional body of work in the visual arts. He has won wide public attention with creations such as Tivoli Castle (1990); Heaven of Delight (2002), a fresco on the ceiling of the Mirror Room atthe Royal Palace in Brussels made up of jewel-beetle wing cases; and his open-air sculptures. He has created many high-profile exhibitions, and was the first living artist to present his work at the Louvre, Paris (L’ange dela metamorphose, 2008), as well as at the State Hermitage Museum in St. Petersburg (2016).

DAG TAELDMAN (b. 1968) is a Belgian composer and musician. He studied composition and guitar at the Jazz Studio in Antwerp, where his teachers included musicians such as Pierre van Dormael, Philip Catherine and David Crane. In 2002, he founded the band A Brand, which recorded five studio albums and toured Europe, the United States and Canada. He played at many festivals, such as Rock Werchter, Eurosonic, Lowlands and South By Southwest. He also worksas a producer, handling engineering and recording for a variety of bands. Over the past twenty-five years, he has composed music for several theatrical productions and films. This is his fifth collaboration with Jan Fabre; he also composed and performed music for As Long as the World Needs a Warrior’s Soul (2001), Je suis Sang (2001), Orgy of Tolerance (2008) and Prometheus Landscape II (2010).

JEROEN OLYSLAEGERS (b. 1967) is a Belgian writer, living and working in Antwerp. His writing career goes back twenty years and encompasses many genres: theatre, prose, columns and film scripts. Several of his plays have been translated into German and published by Verlag der Autoren, such as Tief im Loch und das Schwein sucht mit (2002) and Das blutende Hertz des Fleishermeisters (2004). Olyslaegers enjoys performing his prose texts on stage and has toured several times. He is also socially engaged and has organized several direct actions inspired by the Occupy and Indignado movements. Last year he was awarded the Arkprijs voor het Vrije Woord (a prize for those who champion freedom ofexpression) and the Flemish/Dutch Edmond Hustinckx Prize for his theatre career. This is his second artistic collaboration with Jan Fabre; he previously wrote the script for Fabre’s Prometheus Landscape II (2010).

Fabre introduces us into the atmosphere of tragedy, into the time out of time, where each word echoes in eternity, and the movement gets written into the present moment. What amazes, is the author’s courage and the ensemble’s dedication in creating and performing the scenes which seem to have stopped the time. The acts of getting dressed and undressed, painting, disguising, washing, licking ice-cream, erection of a male sexual organ or decorating the female one, while it is wide open towards the audience, with flower petals, it all happened in real-time, but also slower - in ritual, devotion, presence.

Mount Olympus is a magmatic, apocalyptic, convulsive, vibrant work, its length aside (inevitable moments of tiredness as well as emotions) with a modernity of theatrewriting to be taken in consideration... I think if you like it or not, Mount Olympus represents something incontrovertibly extraordinary in theatre. This “extraordinariness”, liking it or not, is a resource foreveryone.

With this mammoth performance, Fabre delivers a fabulous, powerful and in many aspects unique description of the mythical legends. He does not intend to modernize or to search for problems of our Present time. But at the same time, he is not interested in demonstrating exact classicism either. It is the yearning for the timeless, born out of the opposite values of past and present, which lends Fabre’s theatre performance such a powerful expression. 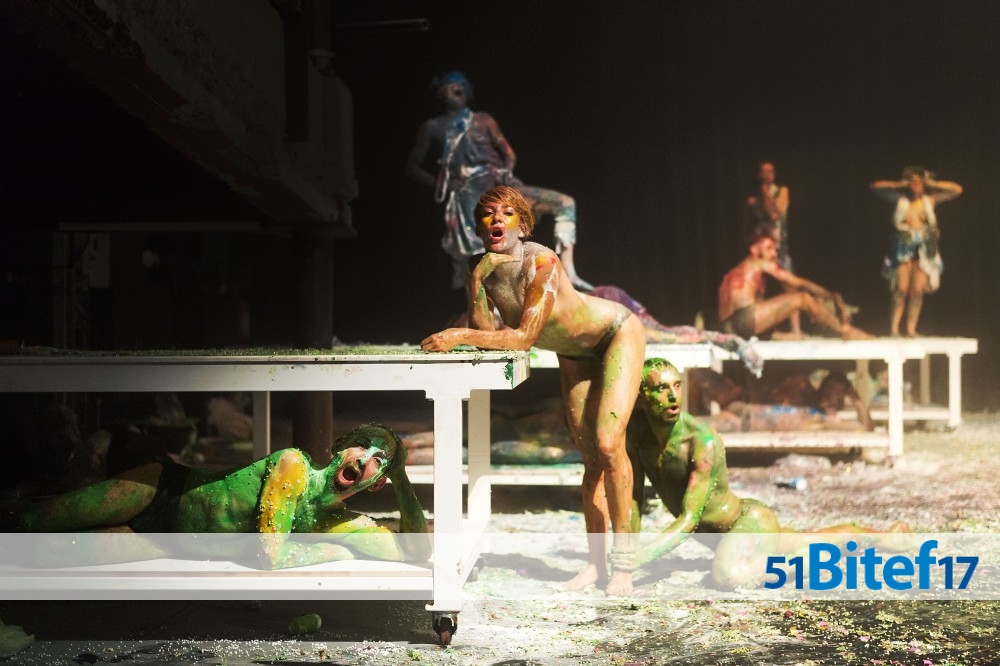 Duration 24h (without interval, with the option of leaving and coming bac

The language in which the play will be performed:
English, French, German, Italian, Dutch