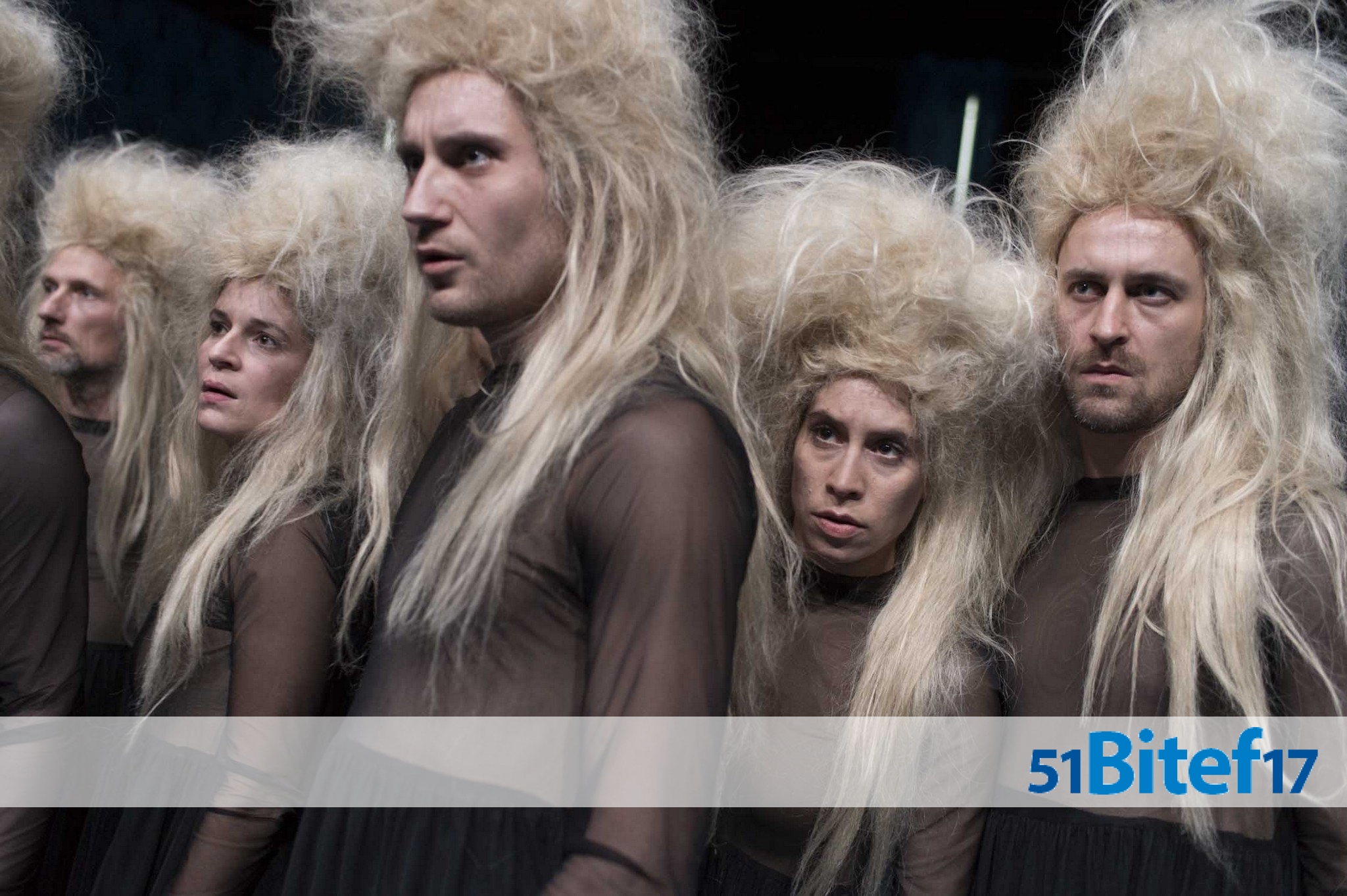 Ersan Mondtag, a young Berlin director of Turkish origin, is one of the rising stars in the German-speaking theatre. Bitef will show two of his productions, thus offering him what he has not always had before: the broadest possible international visibility, whilst the festival itself will renew and strengthen its original role of bringing together cultures and promoting the most inventive artists in the world. The performance produced by the celebrated Thalia Theater in Hamburg is based on epic material, the novel Snow by the Turkish Nobel Prize winner Orhan Pamuk. His lead character and narrator, called Ka (a clear allusion to the main character in The Trial) sets off on an "epic trip" to his fatherland, from Germany to Turkey, where he becomes a participant and a witness to an oneiric web of dramatic, Kafkian events reflecting, at multiple levels, the conflict between the Islamist and secular Turkey. Mondtag uses this material to create an ironic political theatre with elements of trash poetics, cleverly toying with recognisable elements of the Turkish culture, from Dervish dances to the hammam architecture.

In order to write a report on the suicides of young women wearing headscarfs, the poet Ka travels back to the eastern Anatolian town Kars after twelve years of exile in Germany. For three days, it snows non-stop in the town, cutting it off from the outside world. Municipal elections are in progress, marking the victory of the Islamic doctrine. On a theater stage, a quarrel arises during the performance of a didactic play from the AtaTürk era, which condemns the headscarves. Can a woman be forced to take off the headscarf? What weighs more: the reason of a secular state or the personal freedom to exercise religion? The situation escalates as members of an obscure military organization take up the stage during the performance and, led by the actor Sunay Zaim, pretend to have to save the state from the Islamists. The poet Ka undertakes the attempt to uncover the political conspiracy, but gets entangled in the struggle between Turkish and Kurdish nationalists, the army and Islamic fundamentalists. For director Ersan Mondtag, Orhan Pamuk's Snow is highly explosive and up-to-date. With his novel, written before September 11, 2001, Pamuk wanted to represent the entire Turkey through the small town of Kars. After the attack on the World Trade Center, Pamuk began to understand that the problems of Turkey were the problems of the world. Today, Pamuk's appeals: “Please make the difference between Islamic society and political Islam! Please make the difference between political Islam and radical fundamentalists! After the attacks such as the one made against Charlie Hebdo, emotions blur the differences. And that is awful!”

ORHAN PAMUK was born in Istanbul in 1952. His books have been translated into 63 languages, including Georgian, Serbian, Malayan, Czech, Danish, Japanese, Catalan, as well as English, German and French. Pamuk has been awarded The Peace Prize, considered the most prestigious award in Germany in the field of culture, in 2005. In the same year, Snow received the Le Prix Médicis étranger, the award for the best foreign novel in France. Again in 2005, Pamuk was honoured with the Richarda Huck Prize, awarded every three years since 1978 to personalities who “think independently and act bravely”. In the same year, he was named among world's 100 intellectuals by Prospect magazine. In 2006, TIME magazine chose him as one of the 100 most influential persons of the world. In September 2006, he won the Le Prix Méditerranée étranger for his novel Snow. Pamuk is an honorary member of the American Academy of Arts and Lettersas well as the Chinese Academy for Social Sciences, and holds an honorary doctorate from Tilburg University. Pamuk gives lectures once a year in Columbia University. He received the 2006 Nobel Prize for Literature, becoming the second youngest person to receive the award in its history. In 2014, Orhan Pamuk's Museum of Innocence received the European Museum of the Year Award (EMYA) given by European Museum Forum. In the same year Pamuk also received Helena Vaz da Silva European Award, an award which “acknowledges exceptional contributions to the communication on cultural heritage and European ideals”. In 2015, he received two significant prizes in Turkey for his ninth novel, A Strangeness in My Mind: Aydın Doğan Foundation Award and Erdal Öz Literary Prize. In 2016 Orhan Pamuk receives The Yasnaya Polyana Literary Award (from the Museum and Estate of Leo Tolstoy) for “Foreign Literature” category with his novel A Strangeness in my Mind. Apart from three years in New York, Orhan Pamuk has spent all his life in the same streets and district of Istanbul, and he now lives in the building where he was raised. Pamuk has been writing novels for 40 years and never done any other job except writing.

ERSAN MONDTAG was born in Berlin in 1987 and works in the fields of theatre and music, performance and installation. In 2011, he enrolled at the Otto-Falckenberg-Schule in Munich. Two years later, he discontinued his studies there and in 2012, he founded KAPITÆL ZWEI KOLEKTIF. With this collective, he developed durational performances, experimental party formats and interdisciplinary theatre works. During the 2013/14 season, he was a member of the REGIEstudio at Schauspiel Frankfurt and directed 2. Sinfonie (invited to the 2014 “radikaljung”-festivalin Munich), Das Schloss and Orpheus# (invited to the 2015 “radikaljung”-festival). In 2015, Ersan Mondtag created his play TYRANNIS, which earned him an invitation to the 2016 Berlin Theatertreffen. The magazine Theaterheute chose Ersan Mondtag as “Emerging Director of the Year 2016”. He was similarly distinguished as “Set and Costume Designer of the Year”. Ersan Mondtag lives in Berlin. He works at Hamburg’s Thalia Theater, Schauspiel Frankfurt, Maxim Gorki Theater in Berlin and Münchner Kammerspiele, among others. His production of Die Vernichtung, devised together with Olga Bach, is Mondtag’s first work as a director in Switzerland.

Snow, as explosive as it can be (...) Ersan Mondtag cleverly transforms only a few passages from the novel, and doing it through choreography, manages to demonstrate not only its beauty but also the compulsiveness.

With light and shadow, Ersan Mondtag puts the story skilfully into the scene, hovering over the stage to the music of Max Andrezjewksi, who has taken it from various cultural circles. In the quiet moments, the Kafkaesque atmosphere of the foreignness is particularly beautifully evoked.

As in a gloomy symphony, narrative motifs and themes unfold. The production of the young director Ersan Mondtag poses the right questions, thus creating a climate of latent aggressiveness. Patterns of fanaticism and violence: a series of brutal images passes by. It is a dance of the dead.

Ersan Mondtag uses the novel as a stone quarry, taps it according to different topics, and puts the focus of his work on the search for answers to the fundamental question of how communities actually originate. (...) Mondtag translates this into strong images. 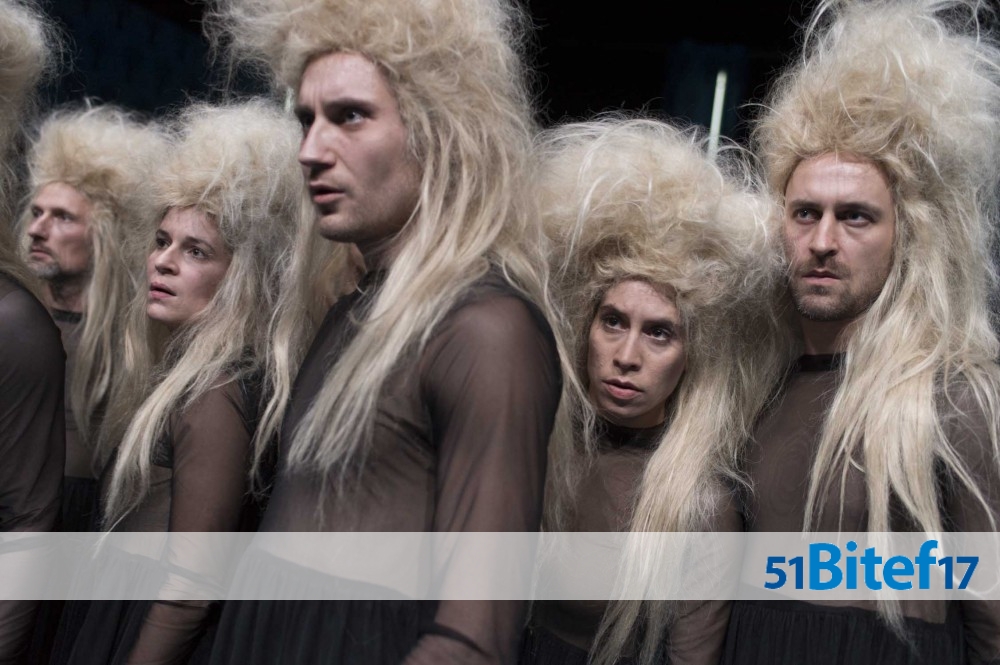 The language in which the play will be performed:
German